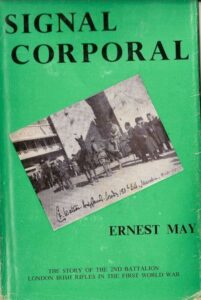 Captain Ernest May wrote the story of the 2/18th London Regiment (2nd Battalion), London Irish Rifles during the First World War, from its formation as a new Battalion in the first few weeks of the war in 1914 until their dispersal during 1918. He was a Signal Corporal with the Battalion throughout the war and would later serve with the Regiment at home during the Second World War.

In 1926, the author was tasked by the Regimental Association with writing a history of the 2nd Battalion and was able to complete the book 46 years later in 1972.

“On 31 August 1914, authority was received for the 2nd Battalion to be raised and it was complete on 5th September. The number enlisted was 1,050 and a few officers and colour sergeants were lent to us by the 1st Battalion…”

“In peace time, a paddle steamer named St Tudno carried holiday makers around the Isle of Anglesey. She was not built for the channel but during the night of 23rd/24th June 1916, she carried us safely, if uncomfortably, to Havre where we tied up about 2am. The Battalion Transport and about 150 crossed in the Australind. Our strength on embarkation was 34 Officers and 938 Other Ranks…”

“We landed at Salonika on 1st December after four days passage from Marseilles, escorted all the way by two destroyers – for the first two days by British destroyers and the last two days by Japanese ones. At this time, the Mediterranean was the happy hunting ground of German submarines and the proportion of sunk shipping was high…”

“We landed at Alexandria and entrained for Ismalia where we were settled in at Moscar Camp on 13th June 1917. Coming from the harsh conditions of Macedonia, in Egypt, we found condition of such comfort as could perhaps not be equaled anywhere else where our army was engaged. Moscar, itself, was a permanent camp of tents with ample accommodation for everyone and water to be had by merely turning on a trap. Melons and fruit in abundance and in great variety and ideal swimming in Lake Timsah only a short distance away…”

“An hour before dusk on 29th October, the Battalion was formed up for the first of the two night marches prior to the dawn attack on the 31st, but first, everyone was closely inspected to check that everything but essentials had been dumped. I think essentials came down to knife, fork and spoon; mess tin, spare socks. Dress was drill shorts; shirt, wool cardigan – but no tunic. All carried a second water bottle and extra 120 rounds of ammunition in a cotton bandolier…”

The Battle of Sheria

“Following the taking of Beersheba, the next few days were mainly devoted to finding and developing water supplies wherever possible and it was 6th November before the next assault could go in….”

“About 2100 hrs on 6th November, I was ordered to take my “team” to Sheria Station. I was told that “the London Scottish had got a patrol at Sheria Station and that is to be the position for Battle HQ tomorrow. Take your team and set up shop at or near the Station. The Brigadier will be along before dawn. If you can’t a find suitable spot at the Station, leave a guide there for the Brigadier.” I asked “How do I find Sheria Station?” The direction was pointed out to me (it was a black night; stars, but visibility not much more than ten yards) and was told the distance was 1½ miles over flat sand. I was warned not to bear off to the right or I might run into unfriendly natives. I knew there was a railway off to our left and that this ran to Sheria Station…”

“In August 1917, during our El Shauth/Wadi Ghuzzie period, the Division got a new Divisional Commander and the 180th Brigade, a new Brigadier…”

“On 26th November, the London Irish relieved the 7th Royal Scots of the 52nd (Lowland) Division at 0300 about 1,000 yards from Nebi Samwil – near the small village of Biddu…”

“A little after midnight on 7th December, we left Kustal and started moving up to our assault positions. The first objective was to be rushed at dawn. In most atrocious weather – high winds and heavy rain – we set off over the roughest country on the approach to our main obstacle, which was the Wadi Surar. This ran straight across our front and was about a thousand feet deep, with sides almost perpendicular. On the far crest was first Liver Redoubt and then Heart Redoubt and the capture of these two redoubts was the task entrusted to the Battalion…”

“On the 15th, we relieved the London Scottish at Shafat and had the 2/20th Battalion on our right at Tel ef Ful. On our left were the 10th Buffs of 74th Division…”

“We enjoyed a few days of peace until 4th January, when we were relieved by the 6th Royal Welsh Fusiliers of the 53rd Division and marched via Shafat to El Aziriyeh, the ancient Bethany. This is on the east side of Jerusalem, just round the southern shoulder of the Mount of Olives…”

The Jordan Crossing and the Raid

“The only road to the east is the Jerusalem/Jericho/Amman road, which crossed the River Jordan by a bridge about seven miles from the point where it flows into the Dead Sea; this road bridge is at El Ghoraniyeh. About mid-way between El Ghoraniyeh and the Dead Sea is an ancient ford at Makhadet Hajlah. There is an old monastery at Hajlah a few hundred yards back from the river on our side…”

“This is the only operation during the war for which there is a detailed Report in the War Diary. I think there are perhaps two reasons for this – when it was over, we immediately moved right back into Corps Reserve, so there was the necessary time to devote to it and, secondly, I think we all felt that something had gone very wrong somewhere…”

“Immediately following our giant “Raid” up to Amman a month earlier, the Turk took measures designed to stop a repetition. He recognised that no force of any size could be maintained in the wild country between the Jordan Valley and the region of Amman without the use of the only road, so he strongly fortified and garrisoned the hills round Shunet Nimrin – in order to stop any future venture even getting out of the Valley…”

“Before this long digression, we left the 2nd London Irish in the Ghoraniyeh Bridgehead on the night of 4th/5th May.

After spending the first part of the night there, we left at 0315 for Anzac Dump near Jericho, where we had the rare luxury of travelling by motor trucks to a camping area near the northern outskirts of Jerusalem. We were then “resting” for 24 hours – and we were ready for it…”