The London Irish Rifles maintained two front line battalions throughout the Second World War. A third one, the Young Soldiers’ (70th) Battalion, was also formed in England at the outbreak of war before being disbanded in 1943.

‘The London Irish Rifles At War’, the History of the Regiment during the Second World War 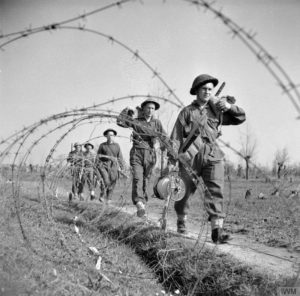 The 1st Battalion sailed from Liverpool to Iraq, via Freetown, Cape Town and Bombay, in August 1942, arriving in Basra in early November. They would spend six months guarding the oil fields in the north of the country before moving onto Egypt in April 1943. They saw their first action in Sicily during July 1943 and then crossed to mainland Italy in October 1943 and fought throughout the Italian campaign, apart from a four month break in Egypt, seeing bitter fighting periods at Monte Camino, the Garigliano river, Anzio and at the Gothic Line. After crossing the Po river at the end of April 1945, the 1st Battalion finished their war time service near to Trieste in Northern Italy.

Battle Honours of the 1st Battalion: 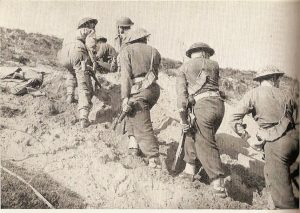 The 2nd Battalion sailed from Greenock to Algiers along with the rest of 38th (Irish) Brigade in November 1942, before seeing its first action in northern Tunisia near Bou Arada in December 1942. The battalion faced a bitterly fought six month campaign struggle in the djebels west of Tunis before becoming the first marching troops to enter the city in May 1943. They were in action again in Sicily during August 1943 and then crossed to Taranto on the mainland of Italy at the end of September 1943. The battalion fought throughout the Italian campaign, apart from a two month break in Egypt, seeing fighting at Termoli, the Sangro river, Cassino, Lake Trasimene, Monte Spaduro and at the Argenta Gap. The 2nd Battalion finished its war time service in Southern Austria where it was disbanded in early 1946.

Battle Honours of the 2nd Battalion: Roll of Honour of all the men during the Second World War, who died while serving with the London Irish Rifles

Honours and Awards during the Second World War