(exact timings to be confirmed). 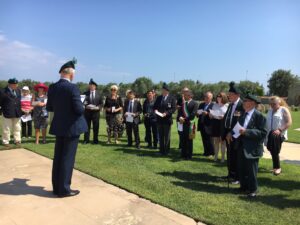 The London Irish Rifles celebrates St Patrick’s Day (on the nearest Sunday to 17th March) when Shamrock is distributed to the Regimental Association, members of D Company and the Army Cadet Force.

In either May or June (usually), the Annual General Meeting (AGM) of the Regimental Association is held and this is followed by the Annual Lunch. All members are welcome to attend the AGM and join the luncheon.

In the middle of June, on the day after ‘Trooping of the Colour’, the Regimental Association and the Pipes and Drums march at the Combined Irish Regiments’ Parade and Service of Remembrance in Whitehall.

On Loos Sunday in September (the nearest Sunday to 25th September), we remember the outstanding courage that the Regiment displayed during the Great War, and in particular when men of the London Irish showed their character and determination at the Battle of Loos in 1915.

There is a Parade at Connaught House on Remembrance Sunday. In addition, the Field of Remembrance outside Westminster Abbey includes a section remembering men of the London Irish Rifles and we attend the opening ceremony on the preceding Thursday.

In recent years, we have commemorated Founders’ Day with a social event at the Freemasons’ Arms in London, close to where the Regiment was founded in December 1859.

In December, also, our Northern Ireland branch lead a Commemorative Service at Belfast City Hall to mark the anniversary of the Battle of Stormberg, which took place at the start of the Boer War in 1899.

Other events can be arranged at shorter notice, and you will find updated details here on this web site.