Our Regimental Museum at Connaught House contains many interesting artefacts, including the original Loos Football.

The Museum is open to visitors on the three days of the year when there are formal Association events in March, September and November – check the events page for the exact schedule.

Museum Curator, Alex Shooter, and his assistants are available at all Regimental Association events and will be able to provide further information on the history of the Regiment.

Despite the difficulties of the past year, we did make a very significant purchase in the autumn of 2020; that is, the procurement of the Medal Group of Lieutenant Colonel EG Concanon DSO TD, who commanded the London Irish Rifles at the outbreak of the First World War.

Edmond Concanon was born in 1875 and, when working as a stockbroker, joined the London Irish Rifles as an 18 year old subaltern in 1893 before becoming a Captain in 1896. He was an excellent horseman and received a temporary regular commission as a Lieutenant to lead the London Irish Contingent to the City of London Imperial Volunteers, travelling to South Africa with the CIV in early 1900. Lieutenant Concanon would be Mentioned in Despatches and awarded the Distinguished Service Order for his service in the Boer War.

After becoming Commanding Officer of the London Irish Rifles in 1913, Lt Col Concanon led the 1/18th Battalion to France but, due to ill health, was forced to leave the battalion in May 1915 before taking up home service duties with the London Regiment. This is a massively important item to add to our collection and we would like to thank the Association for providing vital support to the Museum to be able to do this. 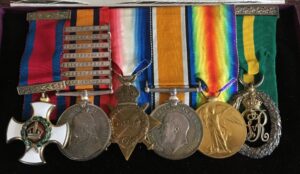 Most of our interactions continue to be via electronic means, either by the regular updating of the website for current and historical stories or providing daily “on this day” updates on Twitter. We also continue to answer family queries about some of the men who served with the London Irish Rifles during both world wars and, in March, we helped the BBC to research the background to a 2nd Battalion officer for their popular social history series, ‘A House Through Time’, that was shown in the autumn.

Like millions of others, we have also been utilising video conferencing for online meetings. In our case, we were able to host a series of monthly Zoom webinars to review the exploits of the London Irish Rifles during war time. Through this means, we were able to share the details of the battle periods in Sicily, Anzio and Cassino et al, with family members and at some of these events, we were joined by eminent military historians and authors that included Richard Doherty, Peter Caddick-Adams and Ian Mitchell.

A particularly interesting session was held to review the period for the 2/18th Battalion in Palestine during 1917/18 and this allowed us to re-contact with a friend of the museum, Assaf Peretz, who is based in Jerusalem. These events proved an excellent way to reach out right across the Regimental family with numerous attendees from home and abroad and with the enthusiastic support of members of D Company and the Association.

In closing these remarks, I would like to thank all our volunteers in providing such valuable ongoing support to the Museum and a fervent wish for a healthy and more fruitful end to 2021 for us all that continues into 2022 and beyond.