By Richard O'Sullivan in Regimental Association on June 27, 2018.

Corran Purdon was born in Queenstown, County Cork but would spend part of his early childhood in India where his father, Major General W Brook Purdon DSO MBE MC, was serving with the Royal Army Medical Corps. He would be sent to school in London and Northern Ireland before attending Campbell College in Belfast and commented later that “my Irish education made such a difference to me when I joined my Regiment – and my ability to play the bagpipes was another asset.” 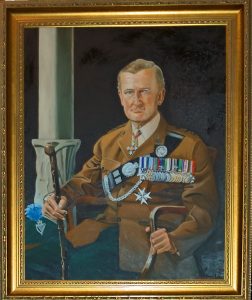 After missing the chance to join the 2nd Battalion (2 RUR) in France in early 1940 due to his young age, Lieutenant Purdon volunteered to join 12 Commando who were forming in Northern Ireland. After more than a year of intensive training in various parts of the United Kingdom, in March 1942, he would take part in Operation CHARIOT, the commando raid on the Normandy dock at St Nazaire in German-occupied France, an important strategic asset for the German fleet in World War Two.  The raid, which entailed ramming a ship, the Campbeltown, laden with explosives on a set timer into the dock, was a success but at the cost of 169 men killed and 215 captured.  Having been wounded in the left leg and shoulder, Lieutenant Purdon was wounded and captured. He was a persistent escaper from a number of different POW camps, and so was sent OFLAG IV-C – Colditz Castle to which officers who persistently made escape attempts were transferred.  When liberated by the Americans in April 1945, both he and another Rifles’ officer decided that they wanted to have “another crack” at the enemy, so they fought in the ranks with the American Army until VE Day.

On his homecoming, Lieutenant Purdon had an initial desire to remain with the Commandos but would soon return to the Royal Ulster Rifles, then still part of the 6th Airborne Division, and was appointed Adjutant of the 1st Battalion (1 RUR), who were taking part in riot control and anti-terrorist operations in Palestine. On promotion, in early 1946, Captain Purdon was sent to command the Regimental Company at the Irish Group Infantry Training Centre at Omagh before spending two years as Adjutant of the 6th Battalion, Royal Ulster Rifles (TA), the first Territorial Battalion of the Regiment to be raised in Northern Ireland. In 1949, he was appointed as a Staff Captain at General Headquarters Middle East Land Forces located at Fayid on the Suez Canal, before being posted back to 1 RUR in Hong Kong as a Rifle Company Commander.

In early 1952, Major Purdon was appointed Training Major for the 1st Bn London Irish Rifles TA at the Duke of York’s Headquarters. He described the Regiment as “full of characters” and later recalled that after his initial visit to the battalion he had noticed that “someone had attempted to boil an egg in my bowler hat!!” The Commanding Officer was Lieutenant Colonel John Cantopher and there were number of other well known figures present at the time, including Colonel Viscount Monty Stopford, Major Basil Irwin and Major Bill Brooks.

In his memoir ‘List the Bugle’, he would describe his time as Training Major with the London Irish Rifles:

“Continuity was the most difficult thing to achieve in a TA battalion but we prepared a basic programme that produced as sound a standard of individual training as we could and then did our best to raise the standard of tactics at section level and above.  We used to run evening sand table exercises for officers and for NCOs, followed by TEWTs at weekends, which were succeeded by actual exercises to practice what had been learnt. Company and battalion training took place at Annual Camp.”  He would speak very warmly about his time with the Regiment: “The London Irish have a terrific esprit de corps and an enviable record and I had greatly enjoyed my two years with them.”

In 1953, Major Purdon passed the entrance examination for entry into the Staff College and, after completing his time there, he took up a role as Deputy Assistant Adjutant General at the GHQ Far East Land Forces in Singapore. While working in the section dealing with terms and conditions of service and with the manpower of infantry battalions, he would regularly slip away from his desk to join officers, NCOs and men fighting the communist insurgency in the Malayan jungle.

Before taking up his next role in command of the Regimental Depot at St Patrick’s Barracks in Ballymena, Major Purdon spent a few months again with 1 RUR, this time in Cyprus, taking part in operations against EOKA. After the depot, he was posted as Second-in-Command of 1 RUR in West Germany before taking over command in April 1962. The battalion returned home for a period in May 1963 before they travelled to South East Asia in early 1964 to undertake operations in Borneo where they confronted Indonesian armed incursions across the border of the Federation of Malaya.

Following two years as a Chief Instructor at the All Arms Tactical Division of the School of Infantry at Warminster, in 1967, Brigadier Purdon took command of the Sultan’s Armed Forces in Oman, which over the next three years included taking part in operations in Dhofar and in the northern part of the country. On return to the UK in 1970, he became Commandant of the School of Warfare in Warminster. He was promoted to Major General in May 1972 and appointed as General Officer Commanding (GOC) North West District before being posted to Cyprus as the last GOC Near East Land Forces.

In 1976, Major General Purdon retired from the Army after 37 years of service and would say that he “had never wished to be anything but a soldier and had hated the prospect of leaving it and its comradeship; the splendid men and women of all ranks of its regiments and corps, together with the excitement and the immense satisfaction of doing the thing you liked best in the world.”

On returning to the UK at the end of his army career, he became a commander of St John Ambulance and governor of the Royal Humane Society, before being appointed as Deputy Commissioner of the Royal Hong Kong Police Force from 1978 to 1981.

Major General Purdon was appointed Honorary Colonel of the London Irish Rifles in 1986 and remarked that his great, great uncle Colonel James Ward had also been the Colonel Commandant of the Regiment at the end of the 19th century. In 1994, he became President of the Regimental Association and would continue to be a regular inspecting officer at Association events for the past quarter of a century. 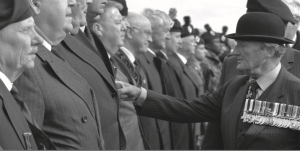 General Corran’s close connections with the London Irish Rifles over so many years has been a constant treasurable pleasure for us all and it was always a privilege to meet him. Whether you were a member of D Company, the Regimental Association or the Army Cadet Force, he would always share a kindly word or generous piece of advice with everyone he met.

The entire Regimental family would like to send their sincere condolences to all the family.

‘List the Bugle: Reminiscences of an Irish Soldier’, published in 1993.