The London Irish Volunteers were founded at the Freemasons’ Tavern, Great Queen Street on 5th December 1859 during concerns over the threats posed by Napoleon III, and which prompted the rise in the Victorian Volunteer Movement. The Marquess of Donegall presided at the original general meeting.

The formal formation of the Regiment took place in February 1860, and at that time was named the 28th Middlesex (London Irish) Rifle Volunteer Corps. The original maximum establishment was a Captain Commandant, 1 Captain, 2 Lieutenants, 2 Ensigns and 200 men of all ranks. Its first uniform was grey with green facings, and a triple sprig of silver shamrock in metal, together with the old fashioned shako bearing a bunch of cock’s feathers. The Regiment’s first parade numbered 60, with the Marquess of Donegall as Commandant. 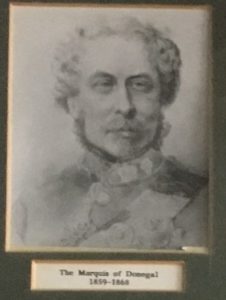 Enrolled members had to pay an entrance fee of 1/2 a guinea, and also an annual subscription of 1 guinea. Honorary members paid 5 guineas, and 1 guinea annual subscription and were allowed to wear the uniform of the corps with the exception of the cross belt.

On becoming a battalion in May 1860, the designation “London Irish” was recognised for the first time. Eight companies were then composed before increasing that number to nine at the end of the year – numbers being then replaced by letters. The first Honorary Colonel of the Regiment, Field Marshal Viscount Gough, was appointed in May 1861. 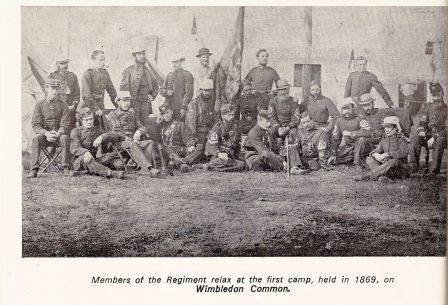 In 1865, 62 recruits from the Government Clothing Factory completed ‘G’ Company and at that time some questions were raised in the press whether the London Irish had abandoned their strict rule of only recruiting Irishmen. In 1866, the Battalion consisted of 10 companies, increasing to 12 in the following year – each company comprising approximately 100 men. In 1870, there was an alteration in uniform, which now included emerald green facings and a silver shamrock on the shoulder strap and, in May 1871, Snider rifles were issued to the London Irish.

Later in 1871, Prince Arthur (Duke of Connaught) became Honorary Colonel of the Regiment, and he would remain so for the next 70 years. In 1872, after several changes in address, the HQ of the regiment moved again back to the Strand where it then remained for more than 20 years. At that time, the strength of the battalion had fallen to 786 men, after a number of resignations (from a peak of 1170 in the 1860s). The Marquess of Donegall continued as Commandant for several more years until ill health struck and he was eventually succeeded in 1883 by Colonel James Ward.

In 1877, the officers’ uniform was ordered to be the same as the 60th Rifles and other standards were changed so that men could not be less than 5 foot 6 inches or more than 5 foot 10 inches in height. On the occasion of the Duke of Connaught’s marriage in March 1879, the officers of the London Irish Rifles presented him with a silver table centre-piece with the names of the officers then serving being engraved thereon. 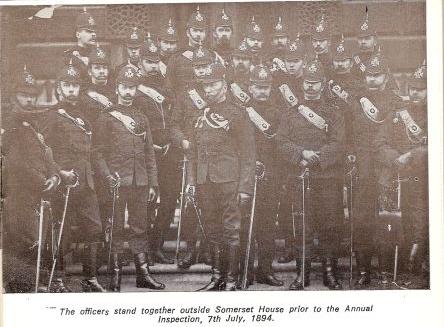 On 3rd September 1880, under the Cardwell reforms and along with other Middlesex regiments, the Battalion was re-numbered as 16th Middlesex (London Irish) Rifle Volunteer Corps, and in 1881 became a Volunteer Battalion of the Rifle Brigade. During the Queen’s Jubilee year in 1887, the regiment kept the ground at Buckingham Palace on the occasion of the Royal Procession to Westminster in June, and took part in the review by the Queen of 63,000 men at Aldershot.

In 1889, Lt-Col Howland Roberts became Honorary Colonel before succeeding Colonel Ward as Commandant in 1896. During this period, the Regiment took part in several Royal Reviews including those for the Jubilee at Buckingham Palace in 1887, and the Royal Review at Windsor for the visit of the German Kaiser in 1891. General Roberts also commanded the military contingent at the funeral of Lord Tennyson in 1892 – the dark uniform of the Regiment being eminently suitable for the occasion.

When in 1892, the Royal Warrant authorising the Long Service Decoration for 21 years of service, three officers were entitled to receive this decoration, along with the Duke of Connaught – these being Colonel James Ward, Colonel Howland Roberts, and Lt-Col Lloyd. There were also 22 NCOS and privates, who had served continuously for 21 years at that time.

In April 1897, Colonel Ward died, being replaced as Commandant by Colonel Roberts, who saw the regiment through the Boer War.