Preparing for Assault and Manpower Problems.

On 9th February, 141st Brigade relieved 142nd Brigade in the Maroc Sector. The London Irish relieved the 22nd Battalion in support of OB3 and South Maroc but sent two platoons of “B” Company to Maroc centre sub-Section on 12th February to reinforce 19th Battalion. During this period, the weather was very bad, with rain, hail and sleet being experienced. There was some apprehension that the Germans were ready to launch a gas attack and special precautions were ordered and a practice gas alarm was carried out.

Repairs to the trenches provided unending scope for infantry working parties and, with platoons at less than half strength, it was difficult to complete the work that had been set out. The casualties sustained at Loos and the constant wastage from shell fire in new and unfinished trench systems – which were being dug on our new line in the salient – reduced the Battalion’s strength to a ridiculously low figure. On one occasion, “C” Company held their section of the line, from the La Bassee – Lens Road towards the Green Crassier, with a total strength of 27 men.

Colonel Tredennick did his utmost to convince higher authorities of the reality of the Battalion’s weakness and, on one occasion, found it necessary to state that it was a farce to talk of Companies and Platoons. The CO instanced the fact that when Brigade spoke of a Platoon being at a particular point, there was actually only five men, hence the necessity of talking in terms of men and not units.

The End of the Loos’ Activities.

15th February saw the end of the Division’s activities in the Loos area when the 1st Division took over and the London Irish were relieved by the 2nd Royal Sussex and moved back to billets in Les Brebis. On 16th February, the Battalion marched to Noeux les Mines and entrained there for Lillers, arriving at 1030am, and at 1130am, in a very strong gale, the Battalion marched into Corps Reserve at Raimbert.

The Battalion had a very happy recollection of their last stay in Raimbert and there was great satisfaction at the prospect of a further period in the place. From midnight on 17th February to midnight on 24th February, the Division was placed on GHQ Reserve under 9 hours’ notice to entrain. Information had been received that a party of London Irish, attached for duty to 173 Tunnelling Company, had sustained casualties and that one man was killed and one man wounded.

The Battalion remained at Raimbert from 16th February to 4th March and, during this period, the Battalion carried out the programme of training, which Brigade laid down. The work was not heavy but was sufficiently comprehensive to keep all ranks busy. A Battalion route march was undertaken on 24th February and the route followed Floringhem and Ferfay. Brigade staged a route march on 29th February, the four Battalions marching from Raimbert to Auchel, Marles les Mines and Lozingehem before returning to Raimbert via Auchel.

On the whole, the weather was fairly good although there were occasional wet days and, on 22nd February, there was quite a heavy fall of snow.

Diversions and the start of the Concert Party.

The Battalion found time for plenty of amusement at this time with boxing displays given by Companies and football matches forming the principal diversions.

Raimbert saw the birth of the Battalion Concert Party. As might be expected from a Battalion recruited in London and drawn from extremely varied material, there was a good deal of musical talent available and, at the concerts given by the Companies and the Battalion, it was apparent that there were many individuals serving, who had received a musical education and were skilled elocutionists and singers. The idea of forming a Concert Party was mooted months previously, but was only seriously discussed from October 1915 onwards.

The Battalion’s RC Chaplain in February was Father A Knapp, who possessed wide experience of amateur theatricals and who was himself a conjurer of considerable ability. With the Padre’s invaluable assistance, the Concert Party was formed, the original members being Cpl Pat Coman, Rfn O’Reilly, J Hoyle, F Hayes, Bird and A Carvill.

The Concert Party was styled “The Shamrocks” and, very soon, rehearsals were in full swing. For the opening show, it was proposed to produce new items, concerted numbers and a sketch called, “The Curate’s Egg”. The lyrics were all original and were written by Rfn O’Reilly, assisted by Rfn Hoyle and Cpl Pat Coman. The music was composed by Rfn R Hayes and J Hoyle.

A grant from the Battalion funds enabled the Concert Party to purchase a quantity of material, which three Raimbert ladies very kindly made up into Pierrot costumes. The scenery was made and erected by the Concert Party themselves. Under the able supervision of Father Knapp and Rfn O’Reilly, the show soon took shape. 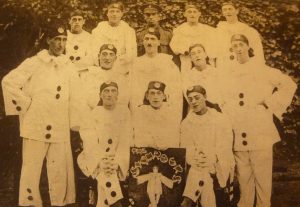 The first performance was given in the village school on 3rd March in front of the Brigadier and his Staff and officers and men of the London Irish and the 19th Battalion. The three French ladies, who had made the costumes, were honoured guests and, as a slight reward for their service, were given front row seats. The lively opening number ran:

From the opening number to the last item, the show was a conspicuous success. Thus established, the Battalion Concert Party gained strength and later would give make equally successful performances.

About this time, a draft of young officers arrived from Winchester, comprising 2nd Lts Conlan, Tierney, Mackenzie-Smith and Hone. Just before joining their Channel crossing on their way out, they had a curious experience in the South-Western Hotel at Southampton.

Like all young officers, they had been carefully warned not to disclose any military information to strangers and, hence, when a very tall grey haired old gentlemen approached them in the lounge of the Hotel and demanded to know their regiment and whether they were off to France, they one and all refused to answer. The old gentleman, however, persisted and said that he did know that any regiment wore the Shamrock as an emblem and he would be most interested to know what unit it was.

Still no response from the careful youths. The questioner continued and said that his enquiry was really quite harmless and that he appreciated their caution – adding that, no doubt, they had often wished his yachts success before the War. Hence, he would like to wish good luck and a safe return to the young wearers of the Shamrock. So saying, he shook each boy by the hand and passed out of the Lounge.

It was, of course, Sir Thomas Lipton and it was not until after he had left that any of the lads grasped who the kindly old gentlemen really was.

A Move to the 1st Army Training Area.

On 4th March, in company with other units of the Brigade, the London Irish set out for the 1st Army training area. The Battalion paraded at 810am, after a 6am reveille and, at 850am, departed by march route for its destination, which was Erny St Julien, a large village in the Laquette river valley. A heavy snow storm raged at the commencement of the march and continued for the greater part of the day. The route took the Battalion to Ferfay and, thence, through hilly and well wooded country in a north westerly direction to Rely, Estree Blanche, turning off westwards to Enguinegatte and finally southwards to Ermy St Julien. On arrival at 330pm, there was difficulty in billeting conveniently but, eventually, the Battalion was split up and accommodated over a wide area in barns. Wet through, as the result of the continuous snowfall during the ten or eleven mile march, the men endeavoured to dry their clothes as best they could. Owing to the scarcity of fuel, this task was impossible and the men had a most uncomfortable night.

As part of their training, Division had instructed Brigades to ensure that their troops practised the close defence of the villages occupied by them, especially as regards platoon dispositions, basing schemes on the assumption that the villages were occupied, for one night only, by the troops on the march. Furthermore, it was laid down that at least one night alarm was to be practised and transport arrangements tested.

On the following morning under lowering skies, the men put on their still wet clothes and paraded at 815am for the first day of field training. After marching out of the village in column of route, the Battalion broke up into artillery formation and then into extended order before concluding the exercise with an attack through woods and the establishment of an outpost line.

During the morning, heavy snow fell and, before long, the troops were again soaked by the melting snow and, as they proceeded cross country in extended order, water squelched out of their boots at every step. After an al fresco meal of hot stew served from the accompanying cookers at 1230pm and eaten in a blizzard, the exercise was resumed until 430pm when the Battalion returned to billets.

In many of the billets, there were no opportunities whatsoever for drying clothes and the troops returned to billets in freezing temperatures and to the cold comfort of the straw covered floor.

Miserable conditions prevailed on the following morning, 6th March, and, after parading at 815am in a snow storm, the men were dismissed for training in their billets. In the afternoon, a village defence scheme was practised, again in a blinding snowstorm with the fields being knee deep in snow and the roads ankle deep in slush.

The next morning, 7th March, after kneading their frozen boots to get them supple enough to be worn, the men washed and shaved, once again in a snow storm. The Battalion spent a truly dismal morning attacking across country in the direction of Cuhem, scrambling through ditches, hedges and drifts and floundering through deep snowdrifts at every step. The Battalion turned later in the morning and returned to carry out a scheme for the defence of Erny St Julien. After a short break for the midday meal, the Battalion paraded again but, in consequence of the atrocious weather, the men were eventually dismissed to billets where training continued under cover.