The highlight of the Regimental Association’s visit to Sicily in September was the unveiling in the town of Piedimonte Etneo of a Memorial, which is dedicated to the memory of the sacrifice of men from the London Irish Rifles. Titled “Memoria e Patria”, (Freedom and Memory), it recalls the time in 1943 when Allied forces liberated the island from the throes of Nazi tyranny following a 38 day military campaign. 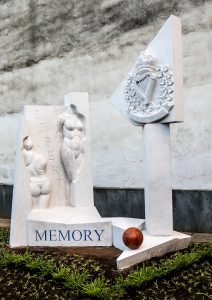 The London Irish Rifles had two battalions serving in Sicily. The 1st Battalion was fighting along the east coast of Sicily towards Catania alongside the London Scottish and Royal Berkshire Regiment, being at that time attached to the 50th (Northumbrian) Division. The 2nd Battalion fought with the Skins and Faughs in 38 (Irish) Brigade as part of the 78th Infantry Division as it advanced along the western slopes of the 11,000 foot high Mount Etna. During the campaign, the London Irish Rifles would suffer more than 300 casualties with 90 of their men being killed in action. At the end of the fighting, both battalions of the London Irish Rifles would spend several weeks at rest before embarking across the Straits of Messina and onto the Italian mainland.

The 1st Battalion had arrived in Piedimonte Etneo on 8th September 1943 and had been immediately warmly welcomed by the townspeople. Some still recall that their parents had told them that “Scotsmen (!) wearing Orange skirts and playing music” had arrived in the town. It is probable that they were referring to Pipers of the London Irish Rifles, in their saffron coloured kilts, playing the most sacred of martial music. The London Irish would spend five weeks in Piedimonte Etneo and their war diaries would note that the town was “the most comfortable place they had been in since it left England. There was plenty of water and almost all the billets had electric light which came on in the middle of the month, enabling the battalion to run the local cinema.” 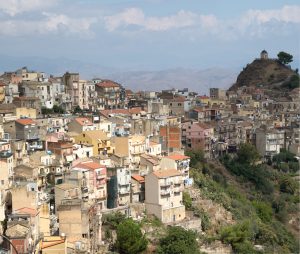 The recent visit to Piedimonte Etneo, which was led by Major Peter Lough, formed part of a five day Pilgrimage to Sicily by thirty members of the London Irish Rifles Association. On our first day, the party visited the CWGC Cemetery at Catania for a Commemorative Service, conducted by Major Dick Scott Kerr, with Pipe Major Robert Williams playing a lament for the fallen. Remembrance Crosses were laid by members at the graves of all 84 London Irishmen buried at this cemetery, and the opportunity was duly taken to reflect on the sacrifices of so many young men.

A number of families had shared their personal stories before the visit, one of which was that of LCpl Michael Shimes, who was killed on 18th July 1943. In a note to the Regimental Association, Lyn Christiensen, the daughter of his widow Violet, had written to say that her mother had recently died at the age of 95 years and her ashes had been transported to Sicily to be buried alongside her husband. In an incredibly moving gesture of personal reflection, Colonel Ian Denison and his wife, Alison, would lay a Remembrance Cross at Michael’s final resting place and later write to Lyn to say that the Association’s visit “offered a unique opportunity to reflect on the enormity of what happened during the Second World War and not least, LCpl Michael Shimes’ contribution to it.”

Following the visit to the Cemetery, the Regimental Association travelled to Piedimonte Etneo to witness the unveiling of the Memorial, although Peter Lough and the Mayor of Piedimonte Etneo, Ignazio Puglisi would face quite a struggle in taking off the covering shroud. The event was attended by local dignitaries and several hundred local residents, which included Dr Felice Vito Vitale and Signor Giuseppe Pagano, the main driving forces behind the recent flowering of the town’s renewed friendship with the London Irish Rifles. The completion of the Memorial in time for the unveiling was a fantastic achievement indeed. 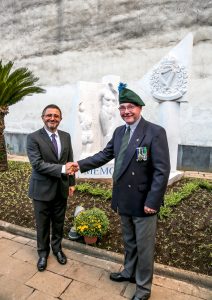 The Department of Visual Arts “School of Sculpture” at the Accademia di Belle Arti in Catania had only taken over the project a couple of months previously – the sculptors being their students, Santo Bonaccorso and brothers Salvo and Federico Alibrio, with close support provided by their tutor, Pierluigi Portale. Especially noteworthy was the addition to the Memorial of a 25kg concrete football, marking the fact that the 1st Battalion’s Commanding Officer Lt-Col Ian Good, had organised a parade on 25th September 1943 to commemorate the anniversary of the Regiment’s part in the Battle of Loos when they had kicked a football across No Man’s Land – it was also remembered that battalion members had regularly played football with local youngsters during their stay in the town. On the following morning, the Town Council of Piedimonte Etneo formally welcomed members of the Regimental Association before processing together to the local War Memorial with Pipe Major Williams again taking the lead. The sentiment of “Freedom and Memory” was one that was shared by Alfio Palazzolo, the President of the Town Council, who said: “The long friendship between our community and the London Irish Rifles has been now consolidated and we are sure that these ties will become even stronger in the future to respect the memory of those days in 1943 when our two communities, sorely tried by war, had found a way to exchange life experiences in order to face up to the complex political situation in Europe at the time.” 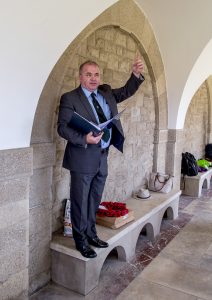 After sampling the cooling waters of Fiumefreddo, the party would be hosted for afternoon tea at the home of Agata Pennisi, which was the location of the London Irish Rifles’ Headquarters during their stay in the area during September 1943. It was another remarkable occasion in quite beautiful surroundings. During the stay in Sicily, the Association members would also walk the battlefield areas near to Primosole Bridge where the 1st Battalion had been involved in bitter fighting during July 1943, and ascend to the 2,000 foot mountain top town of Centuripe, which had been liberated by the Irish Brigade, a feat later described as “Impossible” by General Bernard Montgomery and acclaimed by Winston Churchill in a speech to the House of Commons. As they gazed at the cloud shrouded majesty of Monte Etna, it was a timely reminder of the astounding nature of the valour of all the men fighting 73 years ago during the height of a Sicilian summer.

On our last night, the London Irish Rifles Association would host a fantastically enjoyable Regimental Dinner and it was entirely appropriate that, on behalf of the visitors from London, Major Lough would toast his guests with the words: “The London Irish Rifles will never forget your kind hospitality!