The most distinctive sign of an Irish soldier is probably his headdress, known as a caubeen. So highly individualistic is the caubeen that no two look alike: but what are the origins of this particular piece of headgear?

It is said that the caubeen is the traditional headgear of the Irish soldier, although the only real evidence for this claim is a portrait of Owen Roe O’Neill, who led the Irish confederate force at the time of the civil war between Charles I and Parliament, wearing what might be said to be a caubeen. Whatever its origin, however, the caubeen had become accepted as being distinctively Irish by the early years of the Twentieth Century.

When infantry regiments associated with the Irish Free State were disbanded in 1922, the War Office decided to approve Irish distinction for the serving regiments, including the approval for pipers to wear saffron kilts and caubeens. With this approval came the wearing of hackles. In the case of the two Fusilier regiments, they simply adopted their existing plumes when wearing the caubeen; gray for the Inniskillings and green for the Irish Fusiliers. The London Irish Rifles adopted Saint Patrick’s blue, a colour also used by the Irish Guards.

In 1937 The London Irish extended the wearing of the caubeen to all members of their regiment. They were the only soldiers to wear it through much of the war. It was not until the campaign in Italy, where the 2nd London Irish were a battalion of the Irish Brigade, that the caubeen’s popularity spread. 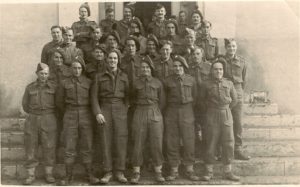 E Company in Italy – a most distinctive group of caubeen wearers

Pat Scott, who commanded the Irish Brigade in Italy, wrote the following note recording how all members of the Irish Brigade came to wear caubeens with their battledress: “The London Irish have always worn this form of headdress. About January 1944, the 2nd Inniskillings, then in the 5th Div, began wearing a similar hat made out of Italian great coats. It was not a very becoming colour, but it was the only material that was available. It was distinctive and it was national. It was based on the type of hat worn for years for by the pipers of Irish Regiments. The 6th Skins at once started copying the 2nd Skins lead.”

“About February 1944, the attention was directed within the Brigade to an Army Council Instruction (ACI) altering the type of headdress that was to be worn in the British army. This headdress was to take the place of the ‘fore and aft’ cap. Entering into the detail who was to wear what and when, this ACI referred to the Irish Regiments in detail.”

“The Royal Inniskillings and the Royal Irish Fusiliers were to wear an article called ‘bonnet drab’. Enquiries were made to find out what a ‘bonnet drab’ was, and it became apparent that it was precisely the same article of headdress as was at present worn by the pipers of all three battalions. It gradually became know as the ‘caubeen’ for short!”

“The Faughs were the only battalion at that time who had not started to make their own version of the caubeen and they did not want to be left out. There was a strong feeling throughout the Brigade that this ACI ordered exactly what everybody wanted to do, and Ordnance supplied these bonnet drabs for the entire Brigade without a murmur.”

“At a later date, the ACI referred to was amended to read ‘pipers only’, but it was too late to go back on it then. There was not a single man in the Brigade who would have been prepared to willingly submerge his distinctive headdress into the very ordinary cap worn by the rest of the army. This was also the view of Ordnance, who continued the issue.”
“Everyone who has known the Brigade in this theatre, from the Army Commander downwards, has acknowledged the great value to morale, self esteem and turn-out that the caubeen has given to its wearers.”

It continues to be worn on many occasions by the Royal Irish Regiment and remains in continuous use by the London Irish Rifles, now serving as a Company of the London Regiment. Whatever the doubts about its true origin it is firmly established as the headdress of the Irish infantryman.

Adapted from ‘Clear the Way’ – a history of the 38th (Irish) Brigade, 1941-47 by Richard Doherty. Published by Irish Academic Press.