Mid-February saw much movement and change to meet German thrusts in the Kasserine. The result of that was to leave a scratch force in the Bou Arada Plain, to be known as “Y Division,” and consisting of the Irish Brigade, a Paratroop Brigade, a French battalion, and artillery.  Brigadier Nelson Russell was placed in command, and one of the first things he did was to form a reserve of a squadron of Churchills, a squadron of the Derbyshire Yeomanry, and the Royal Irish Fusiliers.  The remaining battalions were already stretched over a wide area and the respective commanders disclaimed all responsibility for forcibly extended fronts. The danger of the Djebel Rihane was obvious. 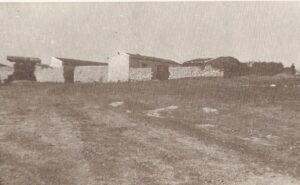 It was a great mass of wooded, precipitous mountain country to the left and rear of the brigade.  It could conceal two army corps but had no real tracks, so supply would be a problem.  If the enemy could get there and maintain himself, the Irish Brigade, and indeed the whole of Y Division, would be in a predicament.  The enemy would be behind the infantry positions and could look down on the gun lines.  That weakness was apparent to all.

On February 26 the storm broke.  The Germans began a thrust on the Bou Arada front and made their main effort on the left flank and rear, in the area of Stuka Farm and the Djebel Rihane, with three battalions of crack troops, old enemies of the brigade, young paratroopers of the Hermann Goering Division, plus ten Panzers.

The London Irish held extended positions west of the Goubellat-Bou Arada road, occupying a series of hills at platoon strength. 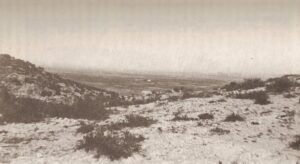 On the left were 9 Platoon on Flat Top Hill, with 8 Platoon on Mosque Hill in the rear.  7 Platoon were on Hadj, with battalion headquarters behind, while 13, 14, and 15 Platoons held Booby Trap, Steep Hill, and Castle Hill respectively on the right centre and 12 Platoons were in the area of Stuka Farm and Point 329, and 4 Platoon were on Carrier Hill, north of Stuka Farm.

The enemy attacked at dawn from higher hills to the north.  They started on Hadj, but they could not penetrate the wire and 7 Platoon held them.  As the fight went on a carrier delivering rations to another platoon returned to Hadj and as the gap in the wire was opened, the carrier was ambushed.  A grenade killed the driver, and a mechanical transport corporal was captured.  Realising there were no mines in the vicinity, the enemy leapt over the wire and advanced on 7 Platoon.  The riflemen remained steady under the threat and returned fire.  The Germans were forced to cover behind a few trees in the area, and from there harried 7 Platoon by constant sniping.  The fight went on for nearly three hours. 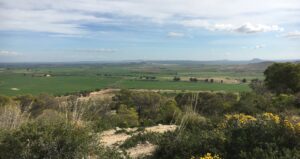 G Company, on the neighbouring hills, was attacked at the same time.  At first light 15 Platoon saw a line of steel helmets along the wire in front of their positions on Castle Hill and promptly opened up.  This platoon, under Sergeant Teague, fought well during the day, and although they were forced to withdraw slightly the enemy did not succeed in pushing them off Castle Hill.  F Company held posts round Stuka Farm by day and went on the forward slopes of the hills by night.  They were still on the forward slopes when the German attack went in and Major Gibbs thought that the farm had been captured by the enemy.  He shouted to 12 Platoon to go and reoccupy it.

Sergeant Johnson took one section to the left, and Captain Galloway with the two other sections moved round to the right.  By this time Carrier Platoon on Carrier Hill had been overrun, and the enemy established an observation-post there.  This enabled them to mortar 12 Platoon advancing towards Stuka Farm.

This platoon found that after all the farm had not been taken by the enemy and that a few men from company headquarters were holding the fort.  They joined forces and staved off enemy attacks for the rest of the day, a gallant effort.  The Germans forced their way into one or two rooms and threw a few grenades, but they were soon put to flight.

During this period of the attack Corporal H Butler and Rifleman C Cook, from the Intelligence Section, did some very good work from an observation-post on Flat Top Hill.  They spotted about eighty Germans advancing on the plain towards Hadj.  The enemy disappeared and then came into view again in the valley alongside Flat Top.  They stopped to eat their rations and had a smoke, blissfully ignorant of the fact that they were being observed.  As they moved off into a gully that ran beside Hadj, Corporal Butler directed artillery fire on to them, causing many casualties.  He also caught a third enemy platoon going in the same direction, but unfortunately the wire to the gunners’ observation-post was cut, and further communication was impossible for the rest of the day.

G Company had a tiring morning.  15 Platoon were still holding the enemy on Castle Hill, but the two other platoons lost Booby Trap and Steep Hills after a fight, and the Germans also managed to occupy Rear Hill.  A counter-attack on the latter was made soon after midday and the position was regained.  The force which made this successful effort consisted of CSM Girvan, Provost Sergeant Gardiner, Bugle Major Chubb, Cook Sergeant Bridgeman (ACC), men from the Ack-Ack and Pioneer Platoons, all commanded by Major DW Conroy and Captain Osborne, both of whom were wounded in the attack.  The casualties on the whole were light, but unfortunately Sergeant Gardiner was killed.  In the late afternoon B Company of the Royal Irish Fusiliers, who had been sent up to help, put in a counter-attack in the area of Stuka Farm.  They were aided by three Churchill tanks, and not only did they retake the positions, but they released some men of F Company who had been captured.

When darkness came, 15 Platoon and G Company headquarters took over Rear Hill and the gunners opened up in strength on the enemy posts on Castle Hill.  A German deserter had given information that a hundred and fifty enemy held positions there and they were heavily blasted.

Intermittent fire went on through the night and just before dawn the enemy withdrew.  At first light a terrific barrage was brought down on Hadj, and when E Company followed up with an attack, they found the enemy had fled, leaving over eighty dead.

This series of well-planned and perhaps desperate attacks by the Germans, part of a large-scale plan, was made by the Hermann Goering Jaeger Regiment, supported by troops of the 33rd Marsh Battalion.  They fought well, but much of their failure to drive the London Irish off the vital group of hills was due to the support the battalion received from the gunners.  The Ayrshire Yeomanry, who supported the London Irish, were splendid throughout the battle, in which the battalion bore the brunt of an attempt to break the British line. Everything considered, the London Irish casualties were light.