On Saturday 25th September 1915, three divisions of 4 Corps took part in a general attack centred on the village of Loos. The London Irish Rifles were in a division composed of London Territorials and were given the responsibility and honour of leading their Brigade, which in turn led their Division. As a result of the battle, a double line of Germans trenches was cleared along a front of four miles and to a depth at its greatest of four miles. The whole of this area, some twelve square miles around the village of Loos, was a desperate network of trenches and bomb proof centres.

On the night of 24th September, the London Irish received their orders and marched out to take up their allotted positions. Rain was falling in torrents as the front line trenches were reached at about midnight. There followed a six hour wait, in which time clothes become sodden in a trench full of slush, yet spirits were high. There was a chance to finish the war, if only a breakthrough could be managed.

At 0630 hrs, the signal came from Major Beresford – a shrill note of the whistle and the cry “Irish – up and over”. Gas had been turned on earlier to help in clearing the ground for the advance but the wind shifted, the gas drifted: a mass of dark vapour. The whole front became covered in gas. The attack went in, gas helmets in use by everyone.

“Over you go, lads,” – they mounted the parapet. Over they went by platoons, half a minute interval between each to be met by immediate enemy fire. The Bttn formed up in four lines, bayonets fixed and then came the charge.

In the foremost rank was the Battalion football captain, Rifleman Edwards, who had a ball tied to his pack. The ball was freed and as the charge went in, the ball was kicked long and hard towards the enemy lines. The ground was flat and grassy like a super huge soccer pitch. The ball was kicked forward, again and again, despite increasing volleys of rifle fire and shrapnel which brought down many of the would be kickers. The ball seemed to give some sort of normality to a hideous scene to give confidence until it was kicked high into the enemy trench with a joyous shout of ”goal”. This exhibition of cool audacity – perhaps unrivalled in the annals of war – instead of retarding the advance added immensely to its forward dash and momentum. 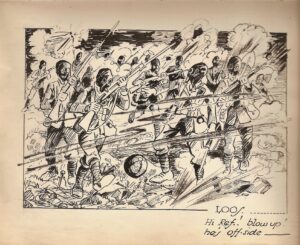 The 1st line trenches were reached – many Germans haggard and dazed by the nineteen day artillery bombardment which had preceded the attack were killed or captured.

The advance to the final official objective, the 2nd line of trenches, were not so easy. Here was an inferno of tangled wreckage strewn with mud, smoke dimmed and torn with shrapnel, through which men could advance but slowly with stumbling feet and gasping breath, while their ears were assailed with horrible noises – screaming, yelling, screeching, crashing. Major Beresford, who led the attack fell with a bullet in the lung. Four officers were killed in the same immediate area but the attack went steadily on. As the second line trenches came into view, the Bttn were inspired for a great effort by the Adjutant, Capt AP Hamilton, who although wounded in the knee and in great pain, hobbled forward guiding the operation. There was desperate hand to hand fighting, bomb firing parties were hard at work, clearing out every corner.

The London Irish Rifles magnificently succeeded in the task given to them: to capture a section of the German second line trench. Carried away, however, by success, the Bttn continued with the advance moving forward broke through to the village of Loos from which they cleared all Germans. Here was the much sought after breakthrough, if only fresh troops in large numbers could have been available to push through the gap and exploit the fighting fury and success of the London Irish Rifles. In the village of Loos itself, a rifleman with the leading sections walked into a café, asked for a “café au lait” from an attractive and business like madame, and after being served, drank the coffee and then picked up his rifle and went back to the battle.

It was from this point that the real trial and test of the LIR really began. The Germans on the Sunday launched a tremendous counter-attack. Would the London Irish be able to hold and beat back the onslaught until reinforcements and relief arrived? Again and again, the Germans attacks came in. There seemed to be no possible escape from destruction and being overwhelmed. All day, Sunday, all day Monday, the Bttn held, they fought on: the nearest a German got to the Irish lines was twelve yards. By this time, those who were left could hardly stand from fatigue – they had been in continuous action since 6am on Saturday. It was early Tuesday morning when the Bttn were finally relieved. As the Bttn passed through the British lines, a huge cheer went up which was continued all the way back to billets: it was cheers all the way.

The remnant was addressed by Brigadier General Thwaites, who said not only was he proud to have had the honour of being in command of such a regiment, but the whole Empire would be proud, when in later years, the history of the battle of Loos came to be written. For he could say that it was the London Irish Rifles who helped to save a whole British Army Corps. They had fought one of the greatest actions of the War. The action won for the Regiment the first battle honour of the 1st War: ‘Loos’ and the proud nickname known throughout the Army: ‘The Footballers of Loos’.

Read Harry Tyers’ account of his time at Loos here.