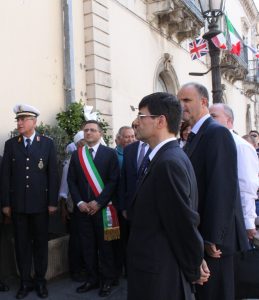 A quite remarkable series of events took place recently in the Municipality of Piedimonte Etneo in commemoration of the men of the two battalions of the London Irish Rifles who served in Sicily during the summer of 1943. In particular, the community remembered the men of the 1st Battalion (1 LIR), who stayed in Piedimonte Etneo for 33 days from 8th September to 11th October 1943.

The Battalion’s war diaries noted that Piedimonte was “the most comfortable place the battalion had been in since they left England”, and the Regimental History said: “In search of a less malarious area, a move was made inland to Piedimonte, a small town at the north-east foot of Mount Etna. It had not been much damaged, and the inhabitants welcomed the London Irish warmly….Loos Day was observed at Piedimonte with a parade and service. A local composer wrote a tune for the pipes, though the battalion was still without most of the instruments, which were in the luggage on a later convoy. This prompted the Commanding Officer to declare that on any future invasion the pipes and drums would be in the first flight.” 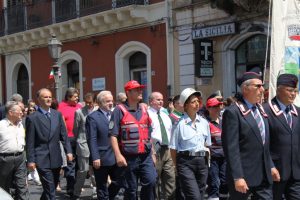 In the morning, the Municipality’s Town Council unanimously voted to confer “Honorary Citizenship” on the Regimental Association’s President, Major General Purdon, and Chairman, Major Peter Lough, and the Mayor of Piedimonte Etneo, Dr Ignazio Puglisi, passed over framed scrolls of Honorary Citizenship to Richard O’Sullivan, who was representing the Regimental Association.

In his speech of commendation, the President of the Town Council, Dr Alfio Palazzolo said:
“In that period when the First Battalion of the London Irish Rifles stayed in our town there were many instances of mutual help among the troops and the population. This is largely documented in war diaries that report the flattering opinions on our townspeople. Many more episodes remain sculpted in our fellow citizens’ memories. They have never forgotten these times, despite only being children back then. Today, these memories and interviews make an important contribution in shedding light on an important chapter in the history of our community…” 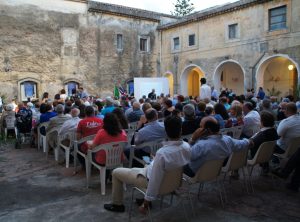 Following the meeting of the Town Council, there was a procession to the Cathedral of Our Lady of the Rosary where a short commemorative ceremony was held at the town’s monument.
Later in the day, a conference at the Capuchin Convent was held to share memories of the wartime period, which included personal accounts from the townspeople of Piedimonte Etneo. The conference was moderated by Giuseppe Pagano and Dr Felice Vito Vitale with historian Rosario Raciti reviewing the whole period of conflict in Sicily. Over two hundred people packed into the convent courtyard to watch a visual documentary, which included some particular evocative testimonies from those who had witnessed the events of 1943. Some remembered the London Irish Rifles’ Pipers entering the town wearing what was described at the time as ‘orange skirts’ and there was a very amusing story about the possible ‘shared’ identity of General Montgomery and 1 LIR’s Second in Command ‘Monty’ Stopford.
A quite memorable day might be best summed up by Dr Palazzolo with his concluding words to the Town Council:

“..I am confident that we will strengthen the thread of memory that links us to that period together and make sure it does not break, and pass the baton on to the younger generations so that they may discover an unreleased page of our history, so they may keep the memory alive.”
Additional thanks of the Regimental Association are due to Charlotte Luisa Abraham who provided a most excellent translation and interpreting service throughout the whole day.