2/20th London Regiment took over the line. Bttn moved to withdraw covered by the 2/20th at 2100 hr a company at a time concentrating again within the Ghoraniyeh Bridgehead about 0200 hrs 5/5/18.

At 0315 hrs, marched from Ghoraniyeh to vicinity of Tel es Sultan where bttn rested until 1215 hrs when again moved onto Anzac Dump south of Jericho. Motor lorries loaded and conveyed to old camp near hairpin bend on Nablus road on northern outskirts of Jerusalem. Bivouacked here. Weather – raining. Transport to come later by road.

Stayed in bivouac all day. Most day – raining. Men resting only as badly needed. Transport arrived about 1500 hrs.

Prior to start, address to Bttn by Major General Shea. 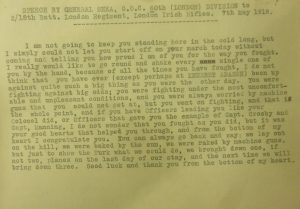 Copies of Order No 94 and 95 regarding the operations are also attached.

Bttn employed on camp sanitary and cleaning work. As much rest as possible allowed to all ranks.

The Battalion, a part of 60th Division, is in Corps Reserve. Not more than 1 hour work to be done daily until 13th when training will recommence.

As for 9/5/18. Transport inspected by Major EN French, Lincolnshire Regiment who had been attached to this bttn as second in command during Major AH Crabbe’s absence in hospital. Condition of transport – bad.

As for 9/5/18. Lieut Col AE Norton DO proceeded on leave to Egypt leaving Major EN French in command.

Same as for 17/5/18 except that no training was done. Eight hours work on road carried out.

Moved to vicinity of Beitin (V6 central). Intent – work on “Home Counties” road to be carried out.

Lt Col AE Norton DSO returned from short leave in Egypt. The bttn was informed by Brigadier General Watson that it was about to be disbanded and used as reinforcements.

Farewell dinner by officers for CO who received instructions to proceed to 54th Division to command 1/10th London Regiment.

Farewell dinner by the sergeants to Lieut General Norton DSO.

Several cases of malignant malaria which proved fatal have occurred lately due, according to the Medical Authorities, to a long stay in the Jordan valley.

Until further notice, the battalion will be under the direct orders of BGC 159 Infantry Brigade, 53rd Division.

No work on roads. Battalion still in same camp.

0800 hrs to 1200 hrs: companies engaged in clearing and cleaning camp and camouflaging bivouacs and tents.