Battalion in camp at U3c central and vicinity (Sh Yusef). Working on new road from Ram Allah to Abu Kush.

Final organisation of draft for 10th Division carried out. The battalion to be split between the three non-Indian (ie Irish) units of that division.

Orders issued for disbandment and movement of draft to new battalions. Drafts as per orders left at 1730 hrs. Major General Shea inspected the drafts as they marched off. The only officer sent to the 10th Division was 2/Lieut GE MacCarthy MM attached to this bttn from the Royal Dublin Fusiliers. Distribution of effective strength of bttn is shown on attached.

Headquarters staff and details left in camp engage in settling outstanding work. Party of officers and NCOs for Base left at 1700 hrs. 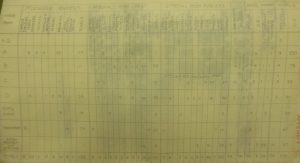